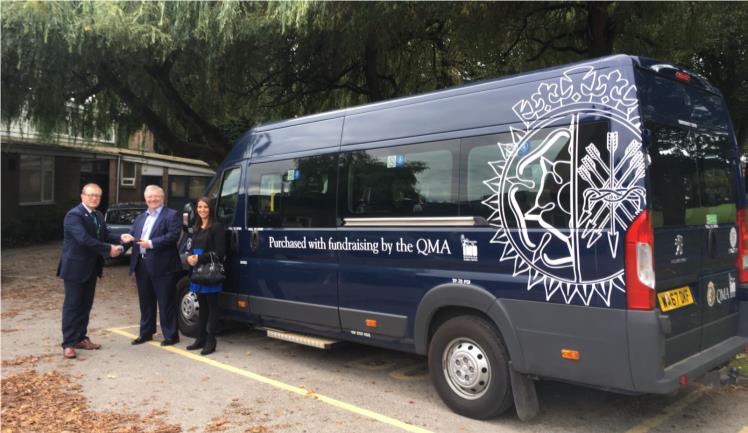 A brand new minibus  being handed over to Richard Langton, the Head  by Andrew Donaldson and Seema Sikka of the Queen Mary’s Association who raised £22000 to fund it and rather splendid it is too. A far cry from the from the first minibus of early days of Farchynys as this extract form the book illustrates:

From the very first meeting of the QMGS Welsh Centre Management Committee in April 1963, transport was on the agenda. “Possible options to be explored for transferring parties to the Mawddach included by train, by hired bus or by school transport.” Fairly immediately it became clear that a minibus was the only feasible option and looking into the capital cost of hiring, buying and insuring one became a key task of the Committee. After test drives of three alternative models, a Commer 14-seater with slatted seats became the favoured choice and was purchased for £836 3s 6d. Thus, did White-Knuckle Coachways come into existence.

As a valuable new asset, a standing order was passed that “no boy in the school would be allowed to drive except in the event of absolute emergency”. That didn’t stop boys playing with the letters of the Minibus and rebranding it as a Rommec. QM has owned many minibuses over fifty years and the White-Knuckle Coachways rides have become a defining part of the experience.